An Overview of 5G Layers 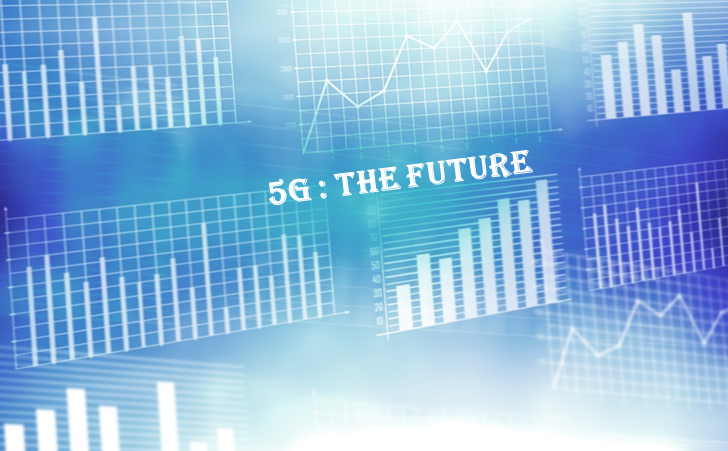 In the first topic, 5G NR: What makes 5G better than LTE, I discussed about the major enhancements that 5G exhibits over the current LTE technology. This article will describe the changes along with their purposes for each of the 5G NR layers. So, let’s dig a bit deeper and review the 5G NR layers.

The first thing is the enhancement of the PHY layer especially the HARQ procedure. 5G NR introduces a concept of Code Block Groups (CBGs) which will essentially divide the transport blocks in smaller groups. These groups will be decoded by the UE and the UE will send HARQ feedback for each of the individual groups. The advantage of this approach is that since 5G will be supporting huge Transport Block Sizes (TBS) and the scheduler usually works with a 10% BLER target so this means that if the gNB is transmitting data to a UE with huge TBS, around 10% of this data will be retransmitted. However, if the transport block is divided into subsets – let’s assume 3 subsets – then the UE will send NACK for only the failed subset and the gNB will only need to retransmit the failed subset instead of the whole transport block. This can effectively reduce the overhead of retransmissions and improve the spectral efficiency. On the other hand, this requires an increase in HARQ feedback overhead, as previously, the UE will only send a single bit feedback for one transport block but now it will need to send multiple bits of feedback for each CBG inside the transport block. This overhead is reduced by implementing an adaptive CBG structure such that it is enabled or disabled by the gNB whenever required. So, the gNB can activate CBGs if the TBS is huge but it can deactivate the CBGs and fall back to the original TBS if the TBS is small as then the overhead of retransmission will also be tolerable.

The next thing is the RLC/MAC layer. The major difference at this point is that the function of concatenation has been moved down from RLC to MAC layer. In LTE, when PDUs arrive from PDCP to RLC, it is upto the RLC to concatenate them based on the requirement of the transport block and then pass the concatenated block to the MAC. However, in 5G NR, the RLC will just pass the PDU received from the PDCP to the MAC after the addition of the header information. Apparently, this change does not seem very significant but it has been thoroughly planned and designed. Consider the scenario, where a LTE UE needs to send 100 bytes and each packet is composed of 25 bytes at PDCP layer so it will request the eNB for an uplink grant by sending a BSR of 100 bytes. The eNB will provide the grant depending on the resources availability. Usually, when the UE requests a bigger grant, the eNB will provide multiple grants spread over multiple subframes to complete the BSR requirement. Hence, the UE will only get the information of the allocated grant after the eNB has sent the PDCCH DCI. This means that if the UE requested 100 bytes and the eNB gave the initial grant of 65 bytes, then the UE can only start building the transport block after the grant is received. This effectively means that since the concatenation is done at RLC for LTE, the data will be kept in the RLC and after receiving the grant of 65 bytes, it will perform concatenation to create a block of data that can fit in 65 bytes of available grant. Since, each packet at PDCP was of 25 bytes, then most probably, the RLC layer will concatenate 2 packets and might fragment the 3rd packet to create a 65 byte block.  I am ignoring the header overheads here for the sake of simplicity. In 5G NR, since the concatenation is not done at RLC so in the case above, the RLC will just send the PDCP packets to the MAC after header addition and once the MAC gets the transport block size indication, it will concatenate the data and send it over the air interface. This approach reduces the pre-processing delay at the UE side since the data does not have to be kept above RLC until the TBS indication is received and it also reduces the latency incorporated by the RLC concatenation in above mentioned case. 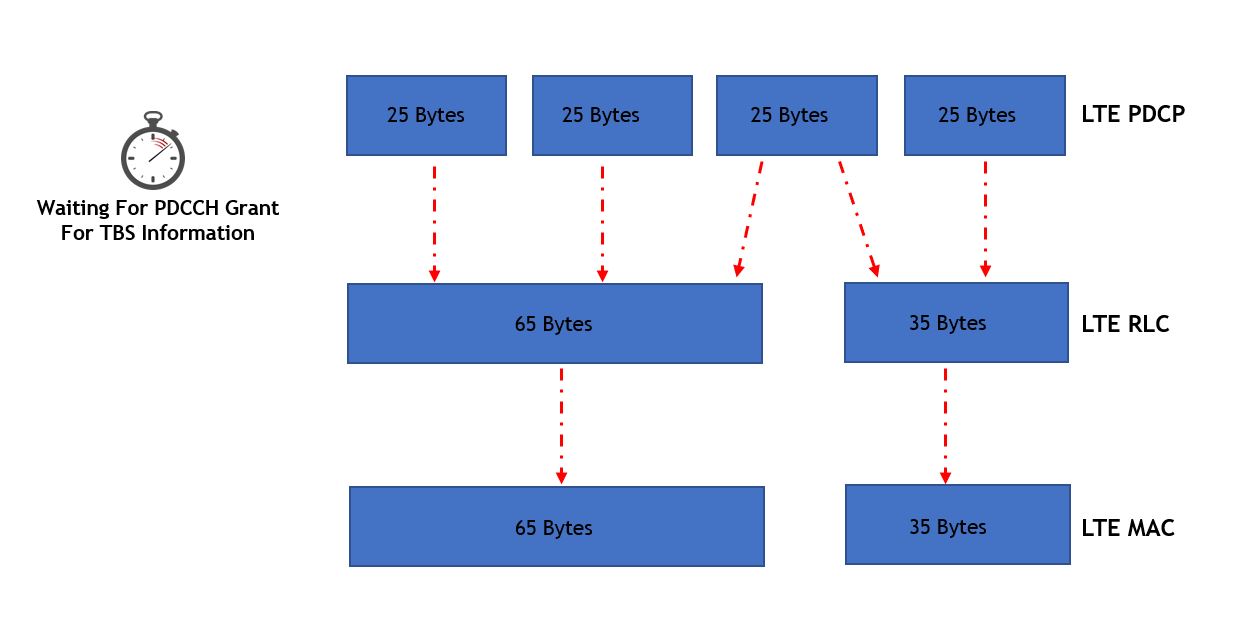 There is a second aspect to this as well which can be seen on the receiving side. Let’s understand that with a similar example. In case of LTE, the UE’s RLC concatenates 3 packets such that 2 packets are completely concatenated while the 3rd packet is segmented and only a part of it is concatenated in the first block. So, the RLC will send a second block which will contain the remaining part of 3rd packet and the 4th packet. In case of LTE, these two blocks will be sent in subframe N and N+1 so the eNB will process them in series. However, in case of 5G NR, we will have uplink MIMO and uplink CA which means that both these blocks will be sent together in the same TTI or subframe N. In that case, the gNB will need to decode block #1 before decoding block #2 as block#1 has first half of the 3rd PDCP packet and only after decoding that block can it make sense of the block #2. Therefore, if the RLC does not have concatenation, then the PDUs can be decoded in parallel rather than in series providing better efficiency and lower latency.

This takes us to the PDCP layer which also have a new feature embedded in it. The 5G NR introduces a concept of duplication and split bearer at the PDCP. The duplication is just like sending one packet multiple times over different carriers to increase the reliability. This can come into play for URLLC to increase reliability especially since the URLLC will be using RLC UM mode and should be UDP oriented so the reliability will need to be improved by using other means. If the data packet is sent over multiple carriers then there is a chance that atleast one of the copies of the packet will be received successfully by the UE. However, there are a few downsides to it. Firstly, the increase in overhead as each duplicate packet will double the overhead and lower the spectrum efficiency. Secondly, if the packet is sent over two carriers, then each carrier will consider it a separate packet for itself. Consider, that the UE receives the packet successfully over carrier 2 but fails to receive it over carrier 1. This will initiate HARQ retransmissions over carrier 1 even though the packet has already been received by the UE but since the UE was not able to decode the packet over carrier 1, it will not know that it is the same packet and the gNB will keep retransmitting and consuming more resources. This issue can be removed by moving the control from PDCP to MAC. If the MAC is centralized or common between the carriers then it will be aware of the HARQ feedback on both carriers and might be able to avoid this scenario.

The second concept of splitting the bearer carries more significant meaning especially in the dual connectivity Non-Stand Alone 5G NR scenario. In this case, it can be decided by the gNB and eNB that since the UE has a dual connectivity to both 5G and LTE, the SRB can be split and sent by both the gNB and the eNB. This is important because 5G NR will mostly be using higher frequency bands which will have a relatively lower coverage than the existing LTE network so transmitting the SRB over LTE will ensure reliability of the signaling link for the UE.

In the next article, I will discuss the scheduling enhancements for 5G. In case of any queries or feedback, please drop a comment below and I would love to respond and help. Also, if this has been helpful, then please subscribe to our Youtube channel – Our Technology Planet for more exciting stuff and videos.

22 thoughts on “An Overview of 5G Layers”