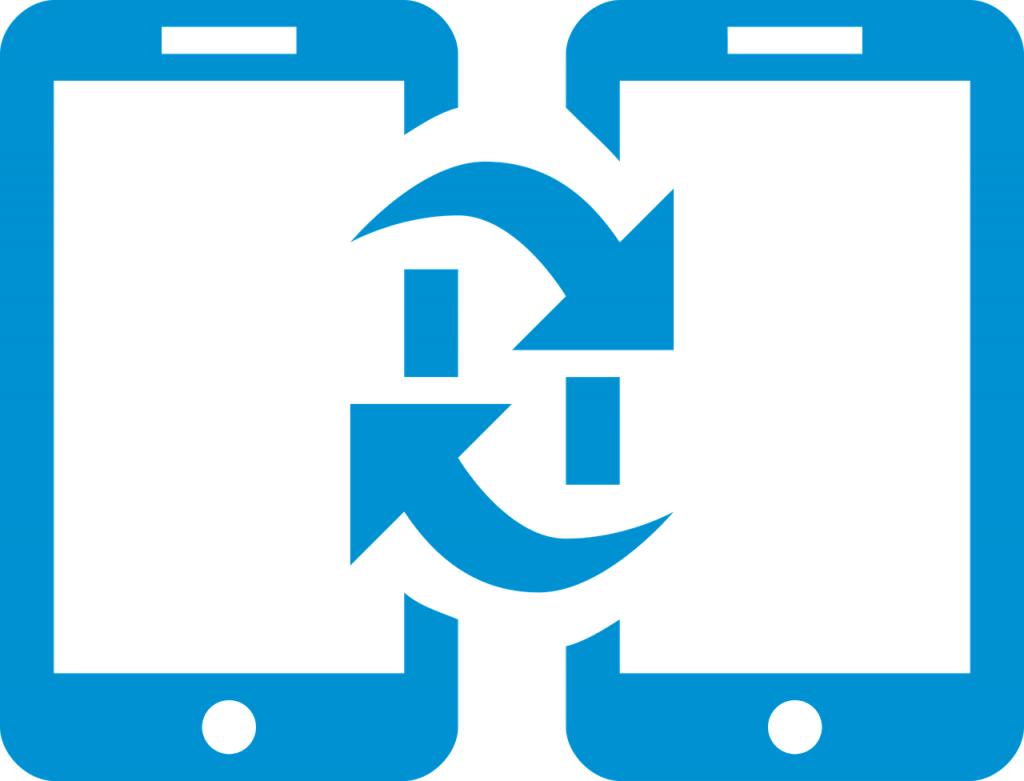 I have received a lot of requests to explain CSFB as it is one of the more complicated LTE KPIs. So, here is a brief explanation on how CSFB works and what are various ways to optimize the KPI itself.

If a handset is camped on LTE and it does not support VoLTE, then it needs to perform a CSFB to initiate a voice call. CSFB (Circuit Switched Fall Back) is a mechanism that sends the user from 4G to 3G/2G (CS RAT) where it can successfully complete a CS Voice Call. If CSFB is not enabled in the network, the incoming voice calls will fail, however outgoing voice calls can still work depending on the mobile. However, let’s start from the basics to understand this in detail.

The figure explains an incoming CSFB call when the UE is in idle mode. If the UE is in idle mode, the core needs to send a paging message to inform the UE that a voice call is being made to the UE and it needs to perform a CSFB. Once, the UE reads the paging message, it will initiate access starting with RACH and followed by RRC setup. The RRC Setup Complete message will contain the Extended Service Request (ESR) and the eNB passes this message to the EPC in S1 Initial UE Message. ESR is the indication to the EPC that the UE has successfully received the page and it wants to undergo CSFB process.

Based on this, the MME will send Initial Context Setup Request to the eNB with CSFB indicator. It is at this point that the eNB will be informed that the CSFB process needs to be started. So, most of the CSFB related counters peg CSFB attempt at this point. This also means that if the paging fails or ESR is not decoded by the eNB, the CSFB KPI on the eNB will not show any degradation. The question is why the eNB does not peg any CSFB counters for paging or ESR? The answer is that the paging is broadcasted and the eNB does not know if that paging message is intended for the UE in its coverage area as the UE is in idle mode and it has no RRC connection to the eNB. The ESR is a NAS message and this a communication between UE and MME as the eNB does not read the NAS messages. So, the only message that informs the eNB about the CSFB process is the MME’s response to the ESR NAS message that has CSFB indicator included. 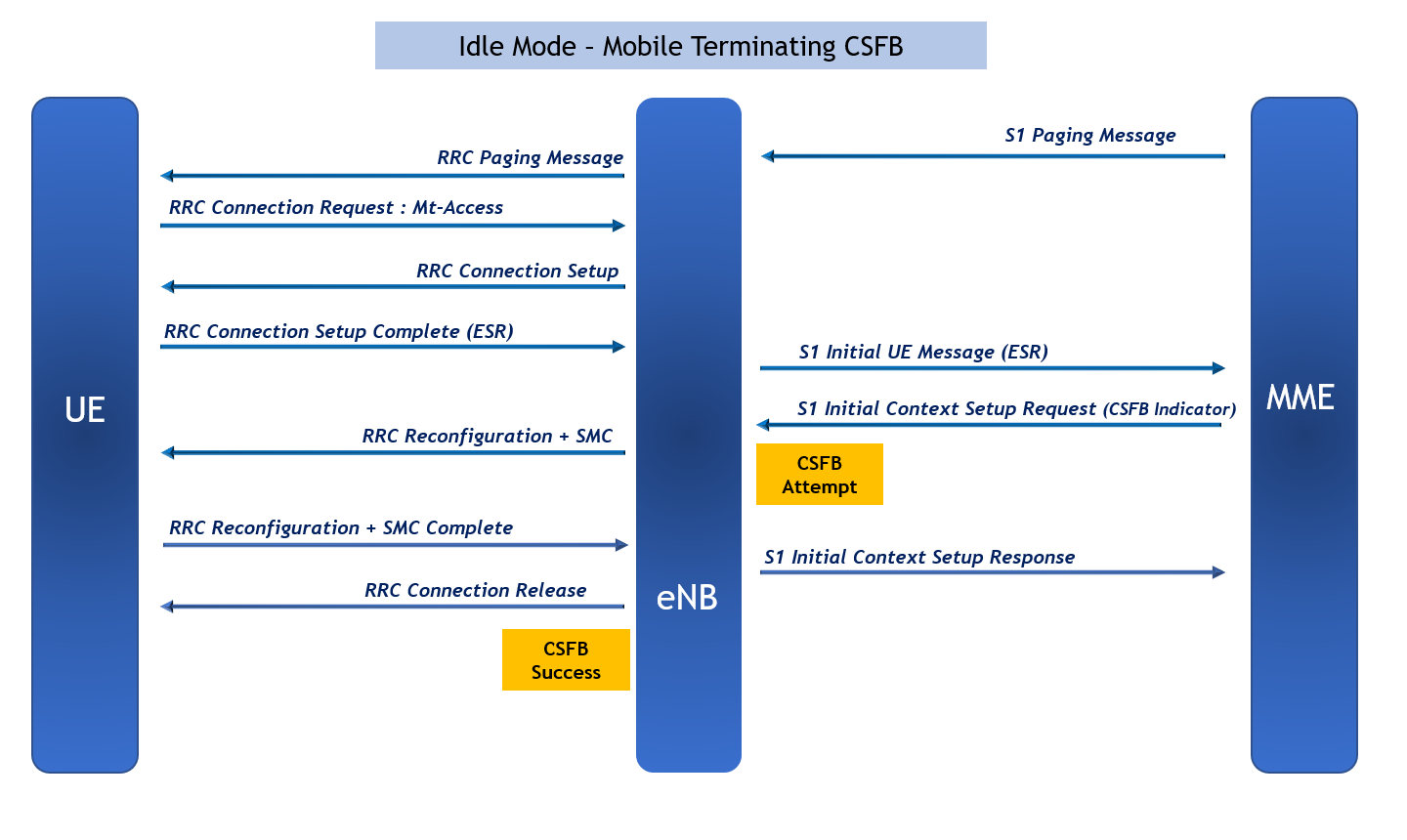 Once the eNB gets the Initial Context Setup Process, it may send a Security Command and RRC Reconfiguration to the UE to create a RAB and as the UE responds to these messages, the eNB sends a Initial Context Setup Response to the MME. After this, the process may vary depending on the type of CSFB implementation done in the network. Usually, there are they types of CSFB mechanisms that are used but there are other variations as well.

Once the UE moves to the target RAT, it still needs to connect to initiate the call. There is a possibility that the call setup fails in this part and the call might fail. However, once again, this will not be pegged in the CSFB KPI on the eNB as the for the eNB, the CSFB is successful when it sends the RRC Release. The eNB has no way of knowing whether the call was successful on 2G/3G. Thus, when there is a complaint of a call failure, just looking at the CSFB KPI does not give the complete picture. It is a good idea to check the CS paging success rate and call setup success rate on the CS RATs as well. 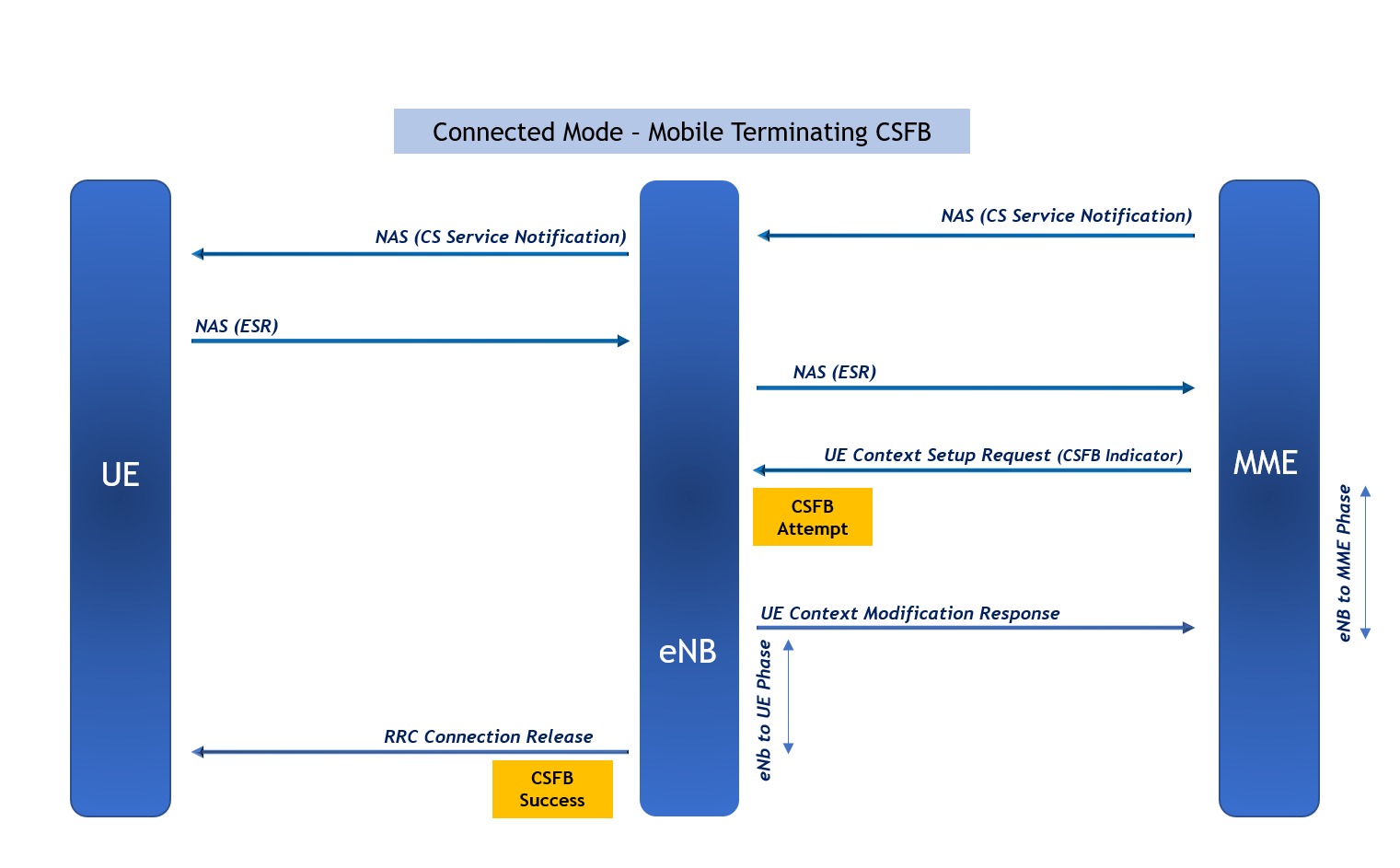 These are some of the basics on CSFB and I will write another article on how to reduce the CSFB call setup time and also about issues that cause a E2E CSFB call setup failure like TAC definition, Inter-MSC issues and paging failures.