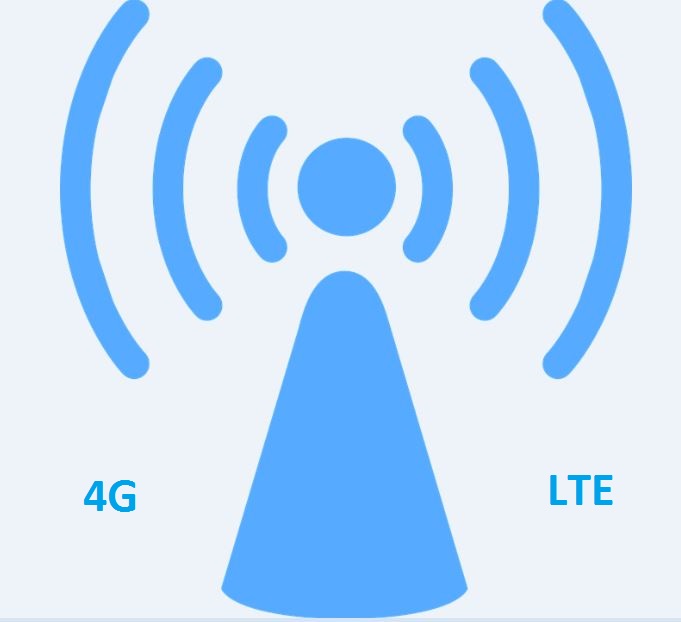 A typical LTE frame is 10 ms (milliseconds) long. Each LTE frame has 10 sub-frames (1 ms each) while each sub-frame is further divided into 2 slots (0.5 ms each). The slots are divided into symbols – each slot has either 6 or 7 symbols. The number of symbols per slot depends on the size of the cyclic prefix. The LTE uses 2 CP sizes – Normal CP (4.67 µs) and Extended CP (16.67 µs). In general configuration and LTE deployments for urban areas, the Normal CP is used so the number of symbols per slot would be 7. The symbol time (Ts) for each LTE symbol is 66.67 us (much shorter than the symbol time for 10 MHz WiMAX symbol). Adding Cyclic Prefix to Ts makes it around 71.34 us. The spacing between two carriers is constant and is equal to 15 kHz (in most of the cases).

Each symbol on a carrier is called a Resource Element, thus, we can say that LTE frame is made up of Resource Elements. A group of 7 resource elements in time axis and 12 resource elements in frequency axis make up a Resource Block (RB) and each RB spans over 180 kHz. Resources or bandwidth is allocated on the basis of RBs. The Scheduler tells each UE (user or mobile) about the number of RBs allocated to it.

1 CCE is equivalent to 9 REGs or 36 REs. PDCCH aggregation layers use CCEs to define each layer. Details of REGs and CCEs will be explained in the next topic.

This is the Physical HARQ Indicator Channel which carries the HARQ ACKs and NACKs for the UE’s Uplink data traffic – ACKs/NACKs for uplink data has to be sent in DL by this channel. PHICH is placed in the first OFDM symbol of the sub-frame. Each PHICH consists of 3 REGs (12 REs) and multiple PHICHs can use the same set of REGs known as PHICH groups. This is made possible by using orthogonal sequences (much like CDMA) and PHICH uses a total of 8 orthogonal sequences. The number of PHICHs supported per sub-frame depends on the total number of orthogonal sequences and the PHICH group multiplier (parameter Ng). Consider that the PHICH group multiplier (Ng) is set to 1 which is equivalent to 7 PHICH groups (10 MHz – 50 RBs) then the number of PHICHs supported would be 7 (PHICH Groups) x 8 (Number of Orthogonal Sequences) = 56 PHICHs. The total number of REs would be 7 PHICH groups x 3 REGs per PHICH group x 4 REs per REG = 84 REs.

PDCCH exists on either the 1st symbol or the 1st two symbols or the 1st three symbols depending on the information in PCFICH. There are 4 aggregation layers for the PDCCH and the difference is in the number of CCEs.

Note: PDCCH may consist of 1st four OFDM symbols for 1.4 MHz BW due to smaller number of carriers, an addition might be required in the number of symbols to transmit the whole control information successfully.

This is the Physical Broadcast Channel and contains the MIB for the LTE network. The PBCH takes 72 subcarriers into 4 symbols around the DC sub-carrier in the second slot of the first sub-frame. It re-occurs once every frame and the whole MIB is delivered in 4 consecutive transmissions in 4 consecutive frames. Since, each LTE frame is 10 ms long so the PBCH takes 40 ms to complete it. It contains the DL BW, PHICH configuration and the system frame number.

A common query is why the PBCH contains the PHICH configuration. PBCH is to be decoded in the beginning so the UE would not be expecting any HARQ ACKs/NACKs so why should PBCH transmit PHICH configuration. The UE needs to know the PDCCH location in the 1st OFDM symbol and to de-interleave the 1st OFDM symbol, it needs to know the locations of PHICH, PCFICH and RS (Reference Signals). Now, the locations of the RS and the PCFICH are calculated by using the PCI (Physical Cell ID – calculated from the S-SS and P-SS which are decoded before the PBCH) and since the UE already knows the PCI before it starts decoding the PBCH so it knows the locations of the RS and the PCFICH. However, it still needs to know the locations of the PHICH groups so that has to be transmitted in the PBCH. Once, the UE has the knowledge about the PHICH, PCFICH and RS locations then it knows that the remaining REs belong to PDCCH.

The PSS is supposed to provide synchronization with symbol timing and knowledge about carrier frequency while the SSS is supposed to provide frame timing synchronization and knowledge about CP configuration. The PSS and SSS combine together to form the PCI. SSS contains the Physical Channel ID Groups which ranges from 0 to 167 while the PSS contains the Physical Layer ID which ranges from 0 to 2. Together, they form 504 possible sequences known as the Physical Cell ID (PCI) which is used to scramble the channels in the cell.

This is the Physical Downlink Shared Channel which contains the Downlink traffic or data for the UEs. Each downlink allocation on the PDCCH points to a resource on PDSCH. It also carries SIB and Paging messages.

Reference signals or symbols are used for channel estimation. They serve the same purpose that the Pilot signals do in other technologies. The location of the reference symbols is fixed along the time axis as they exist on the 1st and 5th symbol of every slot. Each Reference symbol takes one RE and the total number of REs in either the 1st or the 5th symbol depends on the bandwidth as there are 4 Reference Symbols per RB so it means that within each RB, there would be 2 RS in the 1st OFDM symbol and 2 RS in the 5th OFDM symbol. The position of the RS in the frequency domain varies on the basis of the PCI. The distribution of the RS in time and frequency domains helps the UEs to estimate the channel conditions in both time and frequency.

In case of 2 antenna system, an important thing to remember is that the RS position along the frequency axis varies for each antenna. The UE needs to perform channel estimation for both the antennas as the channel conditions might vary depending upon the antenna spacing, so the RS locations on the frequency axis is changed for each antenna. The RS sent by one antenna would be DTX for the other antenna (Discontinuous Transmission) which means there would be no transmission on that symbol for the other antenna. It is important to note that the RS location with respect to the time axis always remains fixed.

If you have any questions or feedback, simply drop a comment below and I will surely get back to you. Also, if this has been helpful, then please subscribe to our Youtube channel – Our Technology Planet for more exciting stuff and videos.