This is the first part in LTE KPI Optimization and more related articles will be published soon. So, let us get started without wasting any further time.

In LTE KPI Optimization series, this session explains the LTE RRC Success Rate KPI. The session covers the signalling flow for LTE accessibility in detail along with messages where the KPIs are pegged. The causes of LTE RRC failures are also covered in detail along with actions that can resolve those issues.

When the UE wants to attach or connect to the network, it needs to setup a RRC Connection as explained in my article LTE Network Entry Steps. But before that it needs to get synchronized in uplink. This is done by sending a RACH preamble (Msg1) to the eNB and eNB responds with a Random Access Response (RAR aka Msg2). This is where the UE sends a Msg3 also known as the RRC Connection Request and this marks the attempt for the RRC Success Rate KPI. This message contains the objective of the connection and based on that it is subdivided into following major categories:

It also contains a UE identity which can be a TMSI value if the UE was already previously attached to LTE and had a TMSI allocation or it can be a random value indicating that the UE does not know about its TMSI or it might be coming from another RAT.

Based on this request, the eNB sends a RRC Connection Setup message which contains the information of SRB and some basic radio parameters like power control, SRI & CQI periodicity.

In order to maintain and optimize the RRC KPI, one should know the major issues that can cause a RRC setup failure.

RRC Setup Failure Due To No Response 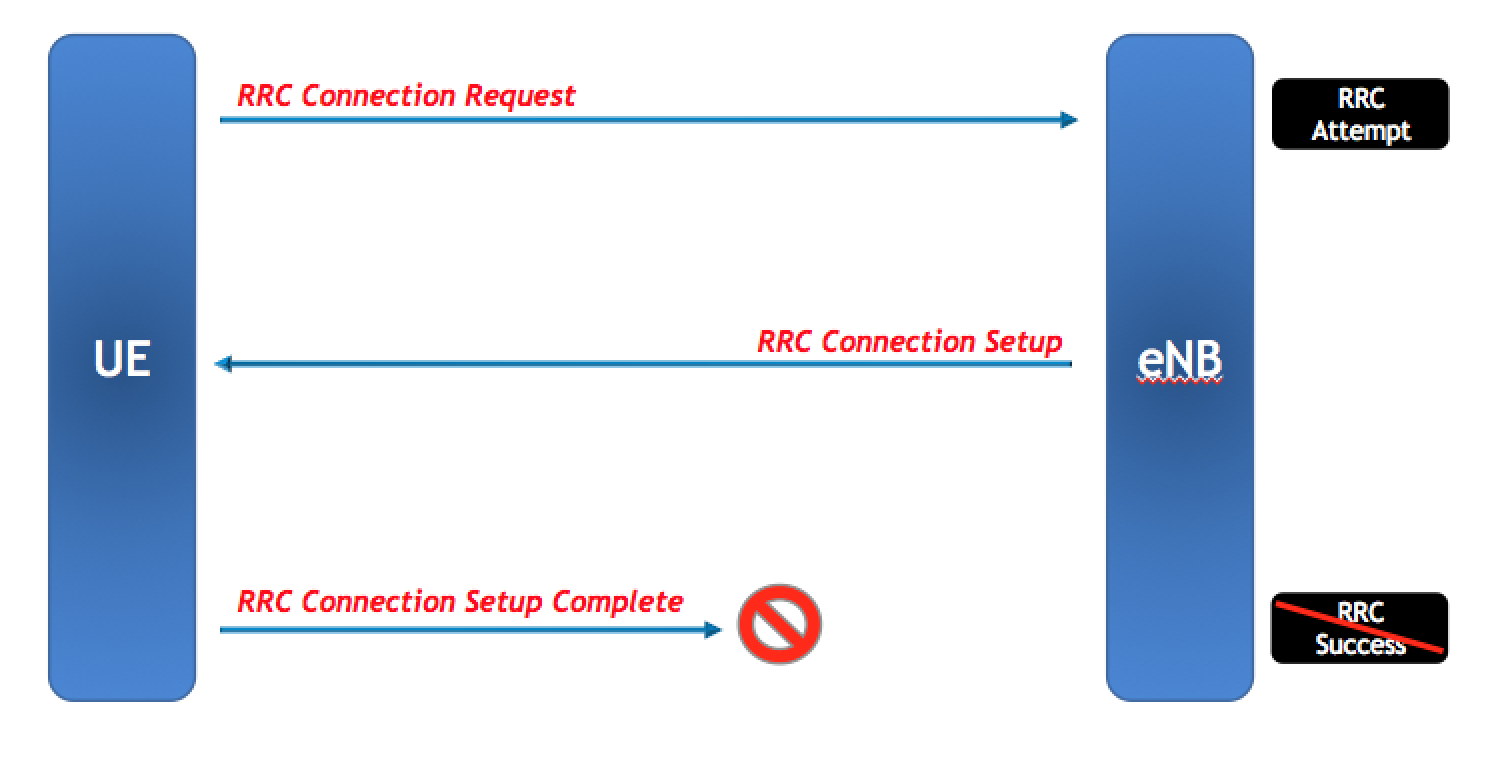 Now let’s understand why this happens. The RRC Connection message is usually around 7 bytes in length while the RRC Connection Setup Complete message may contain the whole NAS information (like TAU or Attach Request) and its size can vary from as small as 8 bytes to as big as over 100 bytes. Consider that a UE near cell edge with limited power sends a RRC Connection Request. Since, it is only around 7 bytes, it will need a small number of RBs so power per carrier will be high. But when it needs to send RRC Connection Setup Complete which is around 100 bytes, it will need a bigger number of resources even if the message is fragmented. So, the average power per carrier will be reduced leading to a higher probability that the message may not be decoded at the eNB.

This is the second issue that can happen but it is usually much less observed in commercial networks compared to the failures due to no response. In these cases, the eNB rejects the incoming RRC Connection Request by sending a RRC Reject message. This is mostly observed when eNB experiences congestion and there are not enough resources left to assign to a new user requesting a RRC Connection.

If the PUCCH is congested, the RRC connection can be rejected. PUCCH carries HARQ ACK/NACKs, CQI and SRIs. If the PUCCH resources are not available, users will not be able to send CQIs and the eNB cannot schedule without CQI information. Usually vendors implement PUCCH in a way that when PUCCH utilization is increased, the CQI interval is increased. For example, users sending CQI with an interval of 10ms will be shifted towards 40ms in order to increase the capacity of the PUCCH.

But when no further capacity is available, the eNB needs to put a limit on new incoming connections resulting in RRC Rejections. Similarly, RRC Rejections can be seen if the active UE count increases beyond the board limit or if the CAPS exceed the limit. The details related to troubleshooting and optimizations for such issues is given below.

The following procedures are usually used based on different scenarios

The easiest and conventional method is the physical optimization. For instance, down-tilting a cell will reduce the coverage and remove the far-away users. This will reduce the probability of RRC failure due to no response. However, there will be issues that might not be resolved by the conventional approach so I have listed down other methods that might come in handy.

There are two relevant timers for RRC Success Rate KPI.

The RRC failures due to lack of response from UE can also be caused if the power control on the PUSCH is not correct or if it is too conservative. For instance, the power control on PUSCH depends on the P0 Nominal value as well as Alpha factor. Different vendors use different settings here like using a low P0 Nominal value (for example -100 dBm) with a higher Alpha factor of around 0.9 or 1 or a using a high P0 Nominal value (for example -70dBm) with a smaller Alpha factor of 0.7 or 0.8. But if both the P0 Nominal and Alpha factor are low then the UE will use a smaller power value to send the RRC Connection Setup Complete and therefore, the chances are that it will not be decoded correctly.

In case there is interference on the cell, then features which mitigate interference should be enabled. For instance, enabling Interference Rejection Combining can provide good gains in such scenarios.

It has been seen that sometimes there are users that are not compatible with the configuration of the network. So, once they receive the RRC Connection Setup message and they find out that they are not compatible with the configuration provided, they do not respond with a RRC Connection Setup Complete message resulting in a RRC failure on the eNB. However, such users keep trying again and again impacting the KPI. This kind of issue can be seen from the traces or CHRs that verifies that it is a single user. It might be inferred from the RRC counters as well since the number of failures are relatively same in consecutive intervals. However, such cases usually go unsolved as it is not a network issue but an abnormal UE problem.

When 4 PUCCH RBs are not enough, they can be expanded to a higher value using parameter or in some implementations, an adaptive approach can be maintained where the eNB changes the PUCCH RB count dynamically based on the load requirement. This approach solves the issue completely.

User Count Based or Flow Control Based RRC Rejections

Different baseband boards and vendors have different limitations on active user count and CAPS (Call Attempts Per Second). When such limitation is reached, incoming RRC Connection Requests are rejected by the eNB based on flow control or resource issue. In such cases, the following basic steps can be done

If you have any questions or feedback regarding this article, simply drop a comment below. I will respond accordingly and also intend to write more about KPI Optimization soon. Also, If you liked this article, then please subscribe to our Youtube channel – Our Technology Planet for more exciting stuff and videos.